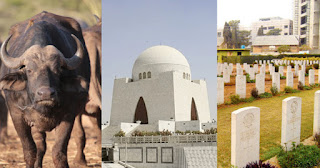 Karachi, the biggest city in Pakistan, is a city inhabited by people of every race, religion and language so each area has its own identity and characteristics. However, the reason for the fame of many areas is their interesting names, which are so different and surprising that whosoever listens gets surprised for a while. We will be revealing these strange names of Karachi areas and for whom these names are given and what is the truth behind them.

Buffalo Colony is an old area of ​​Landhi and the purpose of naming it Buffalo Colony was to build a large cattle market here which would provide meat and milk to the city. But people of Karachi also taken up residence in this area as well.

Gurumandar is counted in Karachi’s older and well settled areas. Near the tomb of Quaid-e-Azam, there was a temple named after the Hindu god Shiva on the Gurumandar. It is said that this temple building was also used as a gurdwara. Currently, there are a number of restaurants and shops in the area, but the temples are still standing in the area.

Hearing the name of the Mosquito Colony, you may be thinking that there will be a large number of mosquitoes, but in fact it is not an area of ​​mosquitoes, but ordinary people also live here. The old name of the area was Machhira Colony as it was mostly populated by fishermen but then due to the slowly growing population, poor sewerage situation and filth, it was renamed as Machher Colony.

This area is located in the famous Liaquatabad Town area of ​​Karachi, but contrary to the name, this place is full of noise. In fact, the area was named Khamosh Colony because of the cemetery in the area.

Gheedar Colony is a suburb located in Landhi Town and at one place due to the presence of wolves in the area, it was renamed as Gheedar Colony.