13th March 2022, Istanbul, Turkey. Twinkling without Shining, a documentary about the lost childhood of Afghan refugee children, based in Pakistan, for the last many years, has won the Special Jury Prize, from the 5th Annual Golden Wheat Awards, held in Istanbul, Turkey. 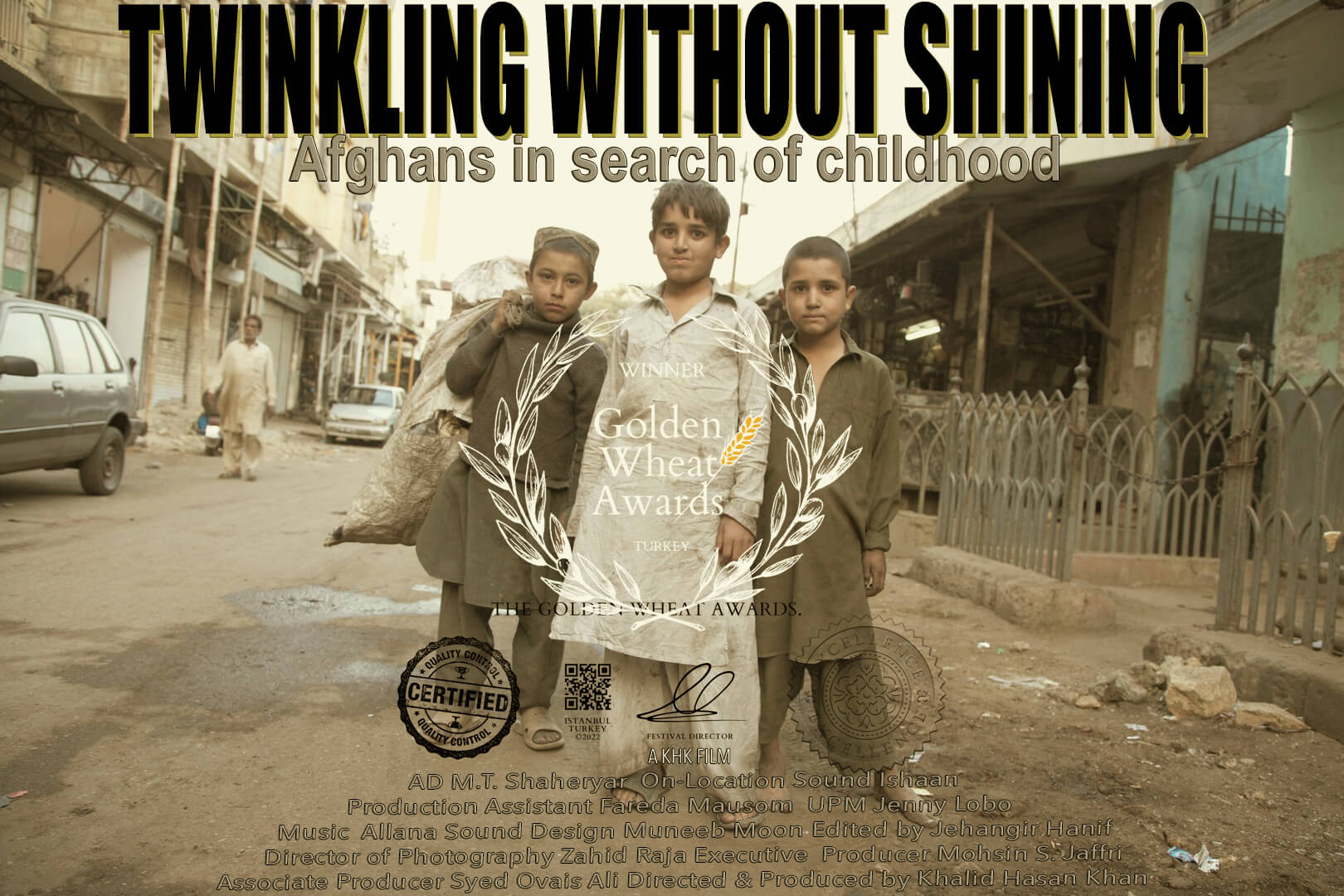 Twinkling without Shining has been filmed in the provincial capital of Sindh, Karachi

Khalid Hasan Khan has directed and produced this documentary film, which was co-produced by Mohsin S. Jaffri and Syed Owais Ali, with Zahid Raja as the director of photography. After Unmasking, Murder of Mystic, The Painters, Barefoot with Godfather of Soccer; Twinkling without Shining is Khalid Hasan Khan’s fifth consecutive award-winning endeavor. These film projects have won fifteen international awards.

Check Also – Why is Priyanka silent on Kashmiris speaking on the death of American black?

Twinkling without Shining has been filmed in the provincial capital of Sindh, Karachi, where displaced Afghan children are living in makeshift shelters, on the sidewalks of different business and residential neighborhoods. They earn their living by picking up recyclable items from the rubbish heaps, on the streets of Karachi.

The documentary narrates the story of the lost childhood of migrant Afghan children, with their age bracket between six and eighteen, who have temporarily settled in Pakistan, thanks to decades of war that brought hunger, disease, and poverty, in neighboring Afghanistan. 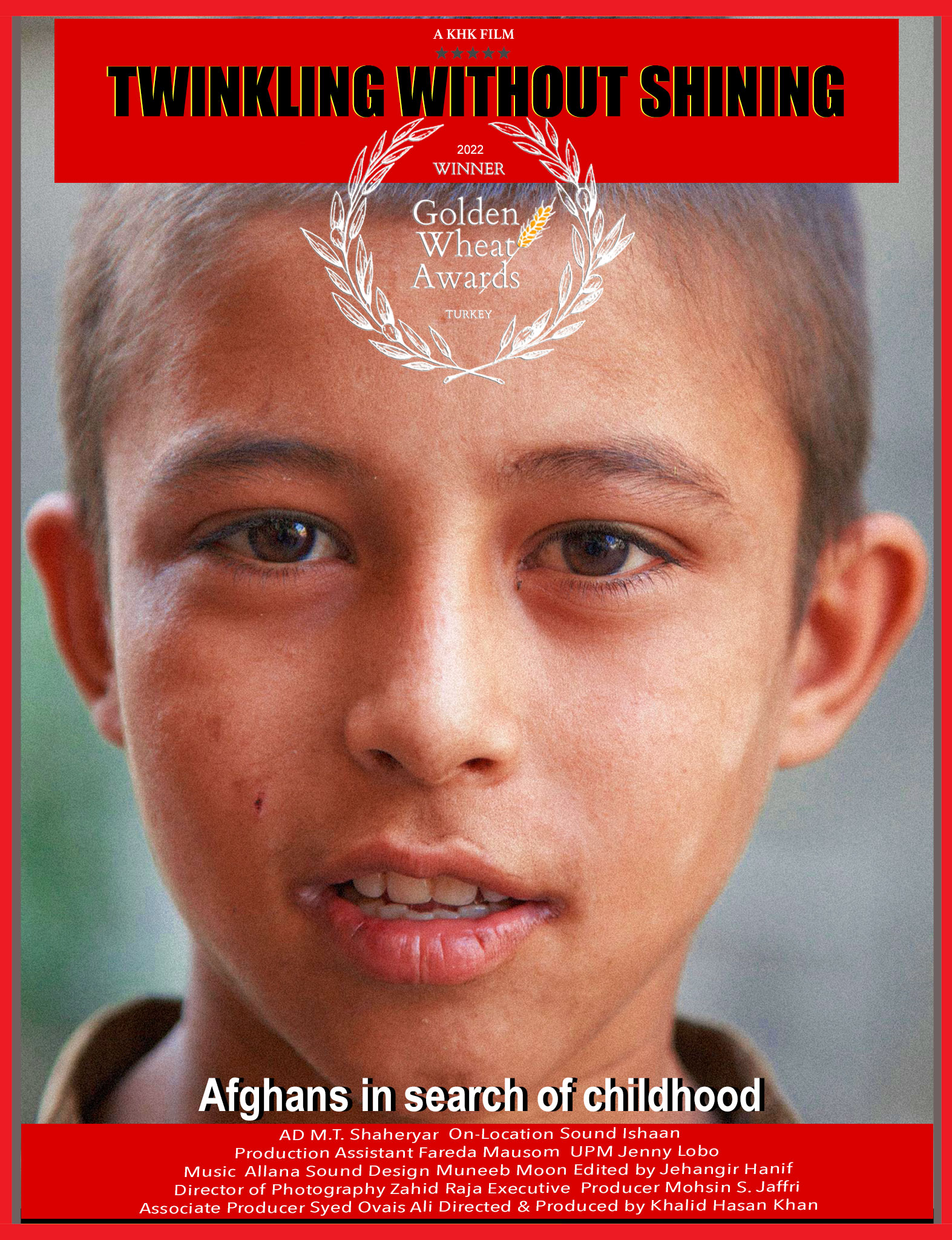 These Afghan refugee children, regrettably, were born but never raised, because of the prolonged Afghan war. They pick up reusable items from litter, including paper, cardboard, plastic, and glass, to make a scarce living. These teenage boys send a sizable portion of their meager income to their parents back in war-ravaged Afghanistan.

According to these children, they earn two to three hundred rupees, roughly 2 USD, a day. They prefer to buy their food instead of relying on free meals, as per their stories, such food is substandard, which makes them sick. And illness hampers their work, as they have to buy medicine from their pocket because the government hospital treatment does not work.

These children do not share the nature of their work with their parents in Afghanistan. Baraan, an Afghan refugee boy confided, “if I ever tell my mother about my work, she would die of grief. So, I told her I wait tables in Karachi.”

Darweza, a 15-year-old Persian speaking boy, hails from the northern Afghan metropolis, Kabul, lives with his 7-year-old brother, Bari, on a pavement in Saddar Town, Karachi, recounted his ordeal, “I cannot even get a job at a tea stall, as I don’t have a local identity”, so he and his younger brother, deal in junk trade. Darweza says,  “the responsibility of my parents is on my shoulders.” Zaman, a Pashtun boy aged 16, from the southern Afghan city of Kandahar, lives with his siblings, in an overcrowded shack, along the railway track of Chanesar Halt, acknowledged, “it is the compassion of Pakistanis that I and eleven members of my family were let to live and work here, otherwise, no other country welcomes us. If we were not in Pakistan, we would have long died of hunger.” He maintained that he was never bullied in Pakistan, but nowadays the runaway inflation has made life miserable.

Khalid Hasan Khan said that the title of the documentary; Twinkling without Shining implies, “these children are glittering stars who are blinking instead of glinting without the shimmer of childhood. With no upbringing, education, food, or medical care, these teenagers have been deprived of their right to innocence. Lost childhood is one of the horrors of war, which has been entirely overlooked by the so-called civilized world. Devoid of amusements, toys, and playfulness, these children were, unfortunately, forced into parenting themselves. The elusive dream of stable and sustainable Afghanistan has become a harrowing nightmare that haunts these angelic souls, which is the reason these Afghan children are still disinclined to return to their homeland.”