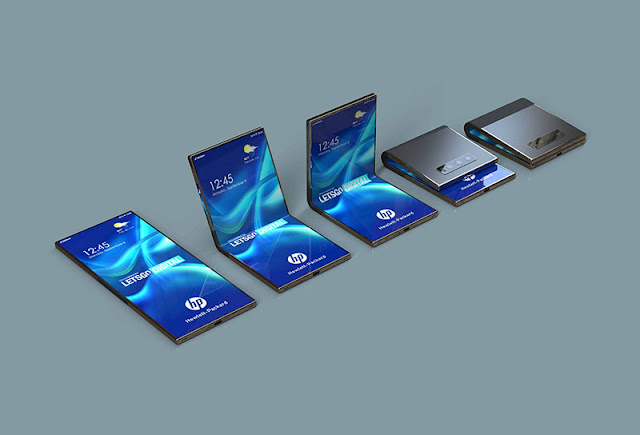 According to reports, HP intends to launch a smartphone with a foldable display Samsung’s Galaxy Z Flip has been around for a while, and this has prompted tech companies to design and unveil products in this style. HP is one of those brands that seems to intend to surprise the media world by offering flexible products and introducing a competitor to the Galaxy Z Fold.

In February of last year ( 2019 ), HP officials registered a patent for a smartphone with a foldable display at WIPO, or the World Intellectual Property Organization.

The patent was approved on August 13, 2020 , and now the news has been published by the news media. However, the registration of this patent can not be a strong and acceptable reason for HP to produce products in this style and context.

It is not bad to know that different companies apply for different patents at indefinite intervals, and this is not a reason to make such products. But if that happened then we would all be in for a surprise, as no one counts on HP as a smartphone. HP is a large company that produces attractive products such as laptops and home PCs. Now the entry of this famous brand into the smartphone cycle can seem like an interesting event.

The image of the product that was published in the news media today shows a smartphone that has a borderless display and no trace of camera holes or holes can be seen inside. In this way, the minds of many users are subconsciously directed to the selfie camera under the screen. Of course, these images are actually a concept design, and in the final product, we may see a circular hole inside the screen for the selfie camera. At the bottom of the body, we see the USB Type-C port . But no trace of the fingerprint sensor can be seen on the body of the device.

This option may be embedded in the screen of this smartphone. According to Lets Go Dgigital , this product will be equipped with a flat, folding and OLED display . As you can see in these pictures, this product bends inwards from the middle of the screen, but this is not the only way to change its position. The HP-produced smartphone in these images can be folded in a special way that the lower part of the device screen will be visible. This way you will be able to see incoming notifications.

The main screen is the only screen of this smartphone and there is no news of the second screen. At the back of the body we see a triple camera with several sensors that are placed horizontally in rectangular compartments.

The dimensions of this smartphone are considered to be the size of a normal smartphone, and if you assume it as a fold, it will become a compact object that can be easily placed on most surfaces or in a pocket.

This smartphone can be considered a serious and tough competitor for Samsung Galaxy Z Flip, and of course, it will probably not be able to compete with the Galaxy Z Fold 2 .

In any case, the entry of the HP brand into the world of smartphones can be an exciting and exciting event. So we have to wait and see what fate awaits the patents filed by this company.