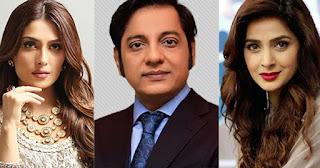 People sacrifice a lot of things in their lives to come to the showbiz because success in this field means the throne of honor, wealth and fame. Some people sacrifice their comfort while others sacrifice their favorite food to look super fit. But there are also some celebrities who have even sacrificed their names, the name people used to call them from childhood. To get fame and unique name, they gave up their names and adopted a new name for showbiz life. We will be revealing original names of famous showbiz celebrities from Pakistani Showbiz.

Ayeza Khan who is beauty queen of Pakistan showbiz and got more fame with name of Mewish from drama Mery Pass Tum Ho. Her real name is Kunza Khan.

Saba Qamar’s name is as attractive as her personality but her parents Did not choose this name for her. her real name is Sabahat Qamar Zaman.

Actress Noor had changed her name from Sonia Mughal to Noor to make a place in the film industry because the names of actresses were being kept short in her era.

Controversial and famous model Veena Malik does not need any introduction but very few people will know that her real name is not Veena Malik but Zahida Malik.

Reema Khan who has made a name for herself in the film industry is famous not only for her beautiful personality but also for her success. Her real name is Samina Khan.

Shaan Shahid is one of the successful men who changed his name to achieve success in the industry. The real name given to him by his parents was Armghan Shahid,

As the name suggests, it will come as a surprise to the listeners that his real name is not Nabeel but Nadeem Zafar. He changed his name to Nabeel.