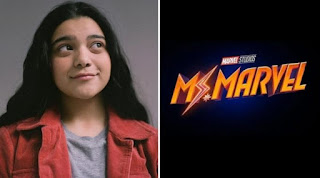 Marvel Studios quoted Iman Walani in a post as saying that she is a Pakistani-American citizen in Jersey and a high school graduate student. Iman Walani started her career with director Minhaj Baig’s film Halla last year before working in a superhero film.

Marvel’s first Pakistani Muslim woman superhero has just been finalised. Canadian born Pakistani origin #Imanvellani has been casted as MCU’s Ms. Marvel . The 18-year-old Iman will make her acting debut in the @disneyplus series as the lead, Kamala Khan. MCU’s first-ever Muslim superhero is a teenager who protects the society with her ability to shapeshift. “Speechless and excited! Wish me luck ❤️,” wrote the young actor on Instagram.

In the said film, Iman Walani had played the role of a Pakistani girl named Hala and the story of the film revolves around her and now Iman Walani will play the role of Kamala Khan of Pakistani origin in the superhero series.