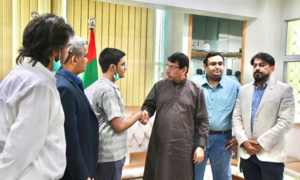 Federal Minister for Information Technology (IT) and Telecom Aminul Haq has announced a government internship to provide training to a student in Karachi, the capital of Sindh province, who has developed an application to compete with the WhatsApp.

According to a report published in Dawn newspaper, a 15-year-old student from Karachi had created an app called ‘FF Meeting’, the video of which was uploaded on social media by Zafar Abbas of the welfare organization ‘JDC’ Foundation.

After the video of the young student went viral on social media, many people had demanded the government to help the young Nabil Ahmed so that the app developed by him would be appreciated.

After people praised 15-year-old Nabil Ahmed and demanded his help at the government level, Federal Minister Aminul Haq summoned the youth and his father for a meeting.

I met with 15 y/o Nabeel Haider, who developed ‘FF Family’ – an advanced version of WhatsApp.

I loved his dedication & have offered an internship via MoIT at the NIC in Karachi, where his app will be floated & groomed.

Federal Minister Aminul Haq tweeted photos of a meeting with Nabil Ahmed, developer of the FF Meeting app, and also said that the student would be offered an internship by the government for further training.

The Federal Minister said that Nabil Ahmed would be sent to the National Incubation Center (NIC) Karachi on an internship of the Ministry of Information Technology so that the app developed by him could be further improved.

The government is being praised after the federal minister helped the student. It should be noted that Nabil Ahmed, a student who developed an app called ‘FF Meeting’, had told Zafar Abbas that he had created an app with better and more features than WhatsApp.

He claimed that his app does not allow any third party to view the content like WhatsApp, while his app is suitable for special people as well. The video also showed Nabil Ahmed’s father, who was seen selling chickens on a motorcycle in the street.

According to the father of the student who developed the app, he used to work as an audio engineer in a big media company till a few years ago, but then he lost his job. In the video, Zafar Abbas demanded the government to support Nabil Ahmed so that the app developed by him would get wide publicity.