A lot has been said about Sajal Aly and Ahad Raza Mir’s rumored relationship. The two have been spotted together on many occasions while giving us some major couple goals.
Ahad and Sajal are currently working together in one of the most awaited dramas ‘Aangan’ and people are drooling over their relationship.
However, it seems like the duo who had been tossing away the rumors regarding their relationship, finally seem to have put all speculations to rest.
Recently, the Gul-e-Rana actress Sajal Aly took to her Instagram account and shared a picture with Ahad Raza Mir. All of her followers fell in love with her flashing killer smile while she is gazing into Ahad’s eyes.
She captioned the picture:

Have a look at the picture! 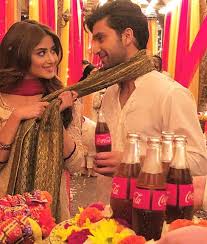 They are just looking cuter than ever!
In the past few months, the duo has been often spotted spending some quality time together and this has only fuelled more rumors. They first appeared together in the drama Yakeen Ka Safar and literally took the screen by storm with their chemistry.
Have something to add to the story? Let us know in the comments section below.
For more updates and details, stay tuned to DailyInfoTech.