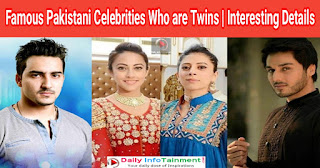 It is common observation for twin siblings that they are alike in appearances and in their habits. They like do things together, pursue the same profession and make the same decisions in life. There are some Celebrities in our showbiz industry who have twin siblings who in many ways are very similar to each other while also somewhat different from each other.Today we are sharing few twins celebrities and their details. We hoe you will like that. Do share your favorite celebrity and what you think about them in comments below. Hamad and Faraz are both from Karachi and both are born in September 1988. Seemingly very similar to each other and are very fond of each other. So Faraz made his mark by working in model advertising at a very young age. Both are getting famous and still single. One of the most popular twins in our showbiz world. Aiman and Minal twins were born on November 20, 1998. They started their careers as a child actor in their childhood. After that both sisters together led the role in drama. Aiman Khan married with actor Muneeb Butt while Minal Khan’s career continues successfully. Both starts not only look very similar to each other, they are also true friends of each other. Both born on June 9, 1981. Annie Jaffrey has made quite a name for herself in the field of acting – but in recent days she has taken the brunt of showbiz while marrying Jafri. Producers and actresses still serve. Ahsan Khan and his twin brother were born in London on October 9, 1981 and spend early life in London. While his brother Yasir Khan is inclined towards religion, he not only avoids coming in showbiz but also avoids being exposed to the camera.

This was overview of Pakistani celebrities who are twins. What is your view on these celebrities, tell us in comments below.