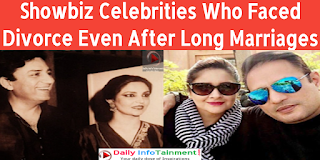 Showbiz has many names that worked hard for many years to nourish their careers and relationships. Celebrities has done everything to change themselves to make their relationships going well but fate wrote something else for them. There are many famous showbiz celebrities who faced divorce even after a long marriage. Here, we will be sharing few famous showbiz celebrities who faced divorce event after a long marriage. Dr. Shaista Lodhi and Waqar spent their life together for thirteen year. If a relationship is required to be ended, then there will be hundred things leading to it to make it happen. Same thing happened with them. Both did second marriages. Qaqar has died after his second marriage due liver problems.

Famous Pakistani Celebrities Relatives Who Hate Each other Actress Nazli Nasr made it into the hearts of the public after the drama “Dhuwan,  ’’دھواں ‘‘” . She was the wife of producer Hassan Soomro. They have two children, a son and a daughter. After 16 years, they ended their such a long relationship on divorce. Now, they are married separately and the children meet with both of them.

Their marriage life filled with love went wrong at some point which no one can tell. The had two children and after fifteen years of marriage they parted ways. Tahira Syed wanted to have maintain their link for children But Naeem ended the relationship. Today Naeem Bukhari is living with his second family while Tahira Syed did not marry.

These were few long term relationships which ended after a long tme.