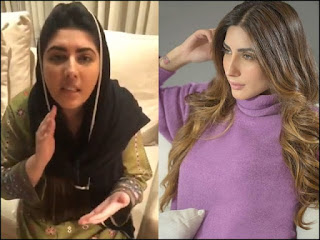 In response to a video that went viral on social media regarding the harassment of actress Uzma Khan, Usman Malik’s wife Amna Usman has also released a video statement in which she states that whatever she did with Uzma Khan, she was fine.

View this post on Instagram
The wife of Usman Malik comes forward to share her side of story and claims that it was not the property of Uzma and Huma but her husband’s second home and she had all the right to come inside. She also added that Usman Malik has no links with Malik Riaz #UzmaKhan #HumaKhan #UsmanMalik #MalikRiaz
A post shared by Daily Infotainment (@dailyinfotech) on May 27, 2020 at 9:56pm PDT

Here is the viral video on social media allegedly showning Malik Riaz’s daughter Amna Usman breaking into a bungalow and abusing actress Uzma Khan. On the other hand, actress Uzma Khan has also registered an FIR against Amna Usman for violence and harassment.

Here is Uzma Khan Press conference on this incident
In a two-part video statement released from the Twitter account of female journalist and anchor person Shifa Yousafzai, Amna Usman says that her husband Usman Malik has an affair with Azmi Khan and she told the actress three or four times to stay away from her husband, but she did not give up.

In addition, the bungalow shown in the video, which Uzma Khan is claiming to be her property, is actually the second house of her husband Usman Malik which he has given to Uzma Khan and his sister for accommodation. She alleged that Uzma Khan was looting her husband’s wealth with both hands.

Amna Usman said in her video statement that they have been married for 13 years and have an 11-year-old child. In that case, whatever he did to save his married life was fine.

She asked what kind of retreat it was that her husband Usman Malik spent three nights in the same bungalow. There has been no further statement from Uzma Khan or Usman Malik in response to the video.