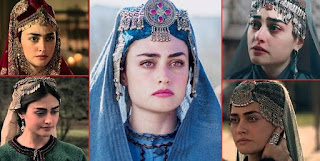 The world-renowned Turkish series ‘Ertugrul Ghazi’ is gaining popularity all over Pakistan. Ertugrul Ghazi and all his characters have become so popular in Pakistan that he has successfully surpassed Turkey where the play was made. Ordinary Pakistanis as well as celebrities are fans of this play.

Actress Isra Beljik, who played the role of “Halima Sultan” in the Turkish drama serial “Ertugrul Ghazi”, has expressed her desire to come to Pakistan. A Pakistani fan of Isra (Halima Sultan) praised her work in a post on social media website Instagram for which Isra thanked the Pakistani fans. Isra (Halima Sultan) in reply to the post thanked the Pakistanis and said that they are deeply grateful for the love they have received from Pakistan.

Isra (Halima Sultan) added that she is excited to visit Pakistan and meet her fans here. At the end of her message, she expressed his love for all Pakistanis and wrote that they should take care of themselves and be happy, peaceful and healthy.

It should be noted that on the instructions of Prime Minister Imran Khan, ‘Darlish Ertugrul’ is being dubbed in Urdu and is being aired on PTV under the name ‘Ertugral Ghazi’ which has now become a favorite drama of every Pakistani.