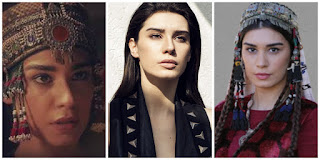 The world-renowned Turkish series ‘Ertugrul Ghazi’ is gaining popularity all over Pakistan.

Actress Borjo Karatl (Roshni), who played the role of the wife of the nomadic chief of Ertugrul in the Turkish drama Ertugrul Ghazi, also expressed her desire to come to Pakistan.

Actress Borjo Karatal (Roshni) thanked the Pakistani people for liking her role in the play and said that she too wanted to visit Pakistan as soon as possible, however she did not specify when she would come to Pakistan.

The actress also expressed her love for Pakistani fans in Urdu.

The producer of Ertugrul Ghazi had also expressed his desire to work with Pakistani actors. In addition, after the popularity of the play, almost all the major cast of the play expressed their desire to come to Pakistan.

It should be noted that on the instructions of Prime Minister Imran Khan, ‘Darlish Ertugrul’ is being dubbed in Urdu and is being aired on state TV under the name ‘Ertugral Ghazi’ which has now become a favorite drama of every Pakistani.