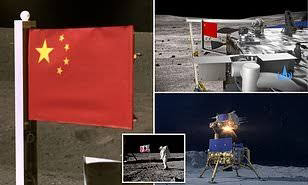 This image was taken from China’s unmanned moon mission Change 5 spacecraft, which was sent to bring samples of rocks from the surface of the moon. The spacecraft took this image before returning to Earth on Thursday. Chinese missions to the moon twice before had a Chinese flag, but it could not be mounted on the moon’s surface. But now China has done it successfully.
The United States was the first country in the world to fly a flag on the moon during the Apollo 11 manned moon mission in 1969. By 1972, several U.S. missions had hoisted five more flags on the surface of the moon.