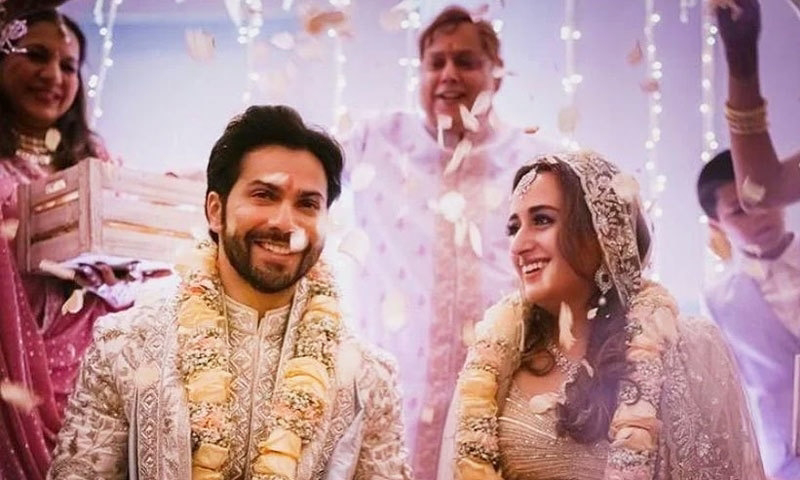 The couple got married at a luxury resort in the coastal area of ​​Alibagh, Mumbai, the capital of the Indian state of Maharashtra, where short guests attended.
It has already been rumored that fewer guests have been invited to Varun Dhawan’s wedding due to the Corona epidemic, but there have been reports that Bollywood stars will attend the wedding, but this has not happened. According to India Today, Natasha Dalal and Varun Dhawan studied together in the sixth grade, but later separated and Natasha Dalal moved to the United States for higher education, where she studied fashion designing.
Natasha Dalal’s father Rajesh Dalal is an industrialist while her mother Gauri Dalal is a housewife, but she is still interested in business. Natasha Dalal was born in Mumbai and returned to India in 2013 after completing her higher education in fashion from New York. She introduced her fashion brand. Varun Dhawan had admitted in a program that Natasha Dalal had rejected him three times before the love affair, but after she started her acting career in Bollywood in 2011 with Student of the Year, Natasha Dalal decided to develop a relationship with the actor.
Natasha Dalal formed a relationship with Varun Dhawan soon after she started acting in Bollywood and later she agreed to marry him and initially in 2018 there were rumors that they would tie the knot soon. News of their marriage continued in 2019 and 2020, but due to various reasons they could not get married and last week there were sudden reports that the two will tie the knot on January 24, 2021.
However, just hours after the marriage began on January 24, Varun Dhawan confirmed the start of a new life by sharing wedding photos. Lets check beautiful wedding pictures of Varun Dhawan and Natasha Dalal. previousNation’s favorite cookie Peek Freans Sooper gets a fresh look
nextStrengthening the Creative Industries across Pakistan with a grant opportunity of PKR 1,070,000 each in eight different categories