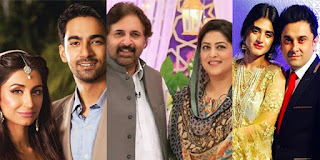 Their marriage can be describe as power of love. Hira broke her engagement at the age of 19 and tied knot with Mani. The couple is blessed with two sons. Hira is one of the most popular and loved actress of Pakistan.

Famous Pakistani Celebrities who Love to Live Without Family Ali Safina came to Pakistan from Glasgow and started his career here as a VJ and DJ. He also had the opportunity to work in Qalam Jalibi. On the other hand, Hira Tareen was a Texas resident and she came to Pakistan as a fashion designer. She introduced her brand as well as did a lot of work in the field of modeling. They fell in love and married In 2013. They have a adorable daughter. Afzal khan who is famous as Jan Rambo really love Sahiba but to marry her was a easy task. When both got married, Sahiba was one of the Pakistan top heroine. The beautiful couple have two sons and living a happy married life.

Fazila Qazi is daughter of famous actor Qazi Wajid, was married to Qaiser Nizami twenty six years ago. Qaiser decided to marry her in the moment he gave her lift to her home. They are happily married and blessed with two sons. Love story of Nida Yasir and Yasir Nawaz was started from the set of drama Muhabbat. They have lived fourteen years together and continuing their loved life. They are blessed with three children. Javeria and Saud were married in 2005. Javeria stepped on the screen as a Naat Khaan and later earned a name in the acting field. Saud at that time was one of the leading heroes of Pakistan and also belonged to a religious family. The couple also laid the foundations of a production house and started presenting the most successful plays. They are blessed with two children. In an interview, Danish Timor said that he had fallen in love with Aiza at first sight, but had requested marriage before expressing love to her. They are married since 6 years ago. They have a son and a daughter. Both of them are popular stars of showbiz industry.