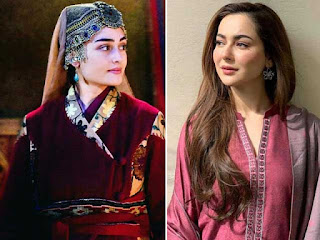 Turkey’s historical drama “Ertugrul Ghazi” has become a favorite drama of Pakistan these days. Pakistani artists, including the general public, have also been captivated by it. Ertugrul’s fans also includes Haniya Amir, who has recently started watching the play and, like other Pakistanis, has become a fan of the play’s heroine, Halima Sultan. She has even hinted at casting herself in the role of Halima Sultan.

Yesterday, Haniya wrote a message on Instagram that if you see me acting in a different way, then surely a character behind it is going to affect me because whenever I start watching a new show, my best I adapt myself to a more favorite character.

In the caption of this post, Haniya Amir wrote the next character Halima Sultan. Haniya Aamir’s post indicates that she wants to play a role like Halima Sultan.