First project of Israel in UAE after restoring relations between ancient rivals is photoshoot of Israeli model May Tager. According to Arab News, May Tager has done a photoshoot in the desert with UAE model Anastasia. A landmark agreement was reached between the UAE and Israel on August 13 in which it was agreed to fully normalize diplomatic relations between the two countries.

In this shoot, both models are waving Israeli and Emirati flags in the desert of Dubai. Fix is ​​an Israeli brand that makes women’s underwear. Prioritizing the traditions of the United Arab Emirates, he has only done photoshoots for his pajamas. Describing the photo shoot as a historic moment in the political and fashion industry, model May Tager said,

“I am very happy to be the first female model to model for an Israeli brand.”

“We respect the rules here,” May Tager said.

“When we heard about the agreement to normalize relations between the two countries, we thought that shooting in Dubai would be the most interesting thing,” said producer Sergei Yohannov. 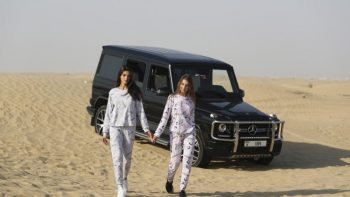 On the other hand, Israeli Intelligence Minister Eli Cohen has claimed that the annual trade between Israel and the United Arab Emirates will reach 4 billion in the next three to five years. Easy access to visas for Israeli citizens and direct flights between the two countries have not yet begun, so the photoshoot team arrived in the United Arab Emirates via Europe on a non-Israeli passport. 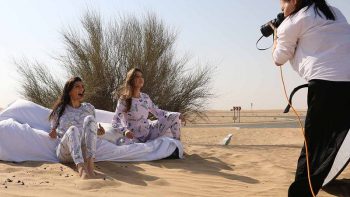 It may be recalled that the Israeli delegation visited Abu Dhabi last week in which the UAE and Israel agreed to form a joint committee for cooperation in the banking and financial sector.