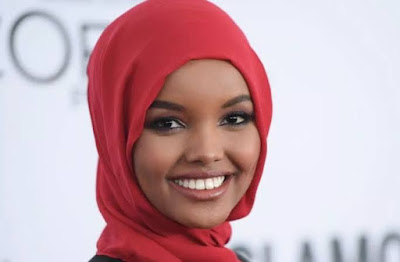 Halima Aden, a 23-year-old Somali-American model who has the honor of being a hijab supermodel, surprised everyone by announcing her withdrawal from fashion and modeling for the sake of Islam. Although Halima Aden was born in Somalia, due to the civil war, she She had to leave her homeland and lived in a refugee camp in neighboring Kenya for a few years. She later moved to the United States, where she competed in a beauty pageant in the state of Minnesota in which she wore a hijab. She became famous all over the world by wearing full Islamic dress in the bikini competition of beauty pageant and later she started her modeling career with hijab. She is one of the few famous models in the world. In April 2019, the Arabic language issue of the well-known fashion magazine Vogue made her a cover pageant along with two other hijab-wearing models.
She was the first hijab model to grace the cover of Sports Magazine. Halima Aden always wore full dress instead of tight or short dress according to her religious beliefs and she appeared with hijab in every fashion show. Until then, she also wore hijabs while promoting underwear brands, and she revealed in an interview last year that Muslim models also send satirical messages to her all the time wearing hijabs and full-body clothing. Two days ago, after spending a few years in the fashion and modeling semi-nude and the glitter of showbiz, Halima Aden was colorful in her series of tweets.
According to the British newspaper The Guardian, Halima Aden announced in a series of tweets that she will leave the world of fashion and modeling and live according to the teachings of Islam. However, models from all over the world expressed surprise.
However, many models, fashion and showbiz personalities also supported Halima Aden’s decision to quit modeling, calling it her choice. Halima Aden said in her tweets that it took her a long time to wake up, but now she is awake and she has found the real Halima Aden full of faith.
She apologized to the people for doing fashion and modeling in the past and said that she will now live according to the teachings of Islam for the sake of peace of mind and for the real purpose of life. Although black and a minority, she has never been sexually harassed and is turning away from modeling for the sake of her beliefs and religious teachings.