Minal Khan and her husband have been the talk of the internet. This couple sets the bar high when it comes to romantic vacations like a lavish destination wedding or an exotic honeymoon. She wore Erum Khan’s custom-made signature couture for the magazine’s cover shoot and was recently seen wearing it again. 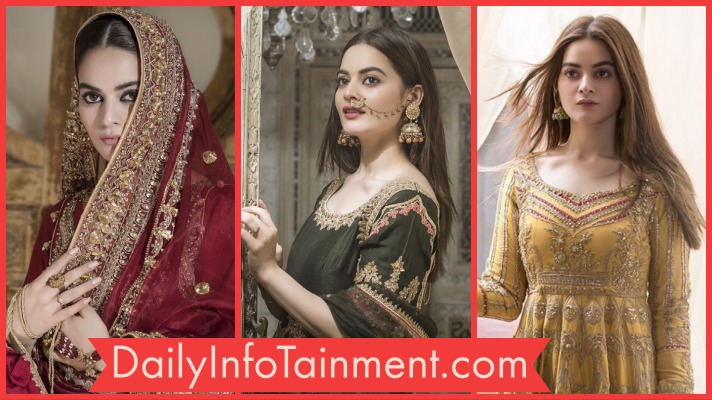 A storey is told through Erum Khan’s ornamentation and texture, and she turns a concept into a piece of art. The fashion designer is well-known for her fusion of skill and excellence in her diverse designs. She’s been the go-to designer for beautifully crafted yet sensual couture since her debut in 2011, and Erum Khan has made her mark in the business ever since. When it comes to Minal’s formal attire, she has used dark colours and fine craftsmanship to make her glow. The attire, which is traditionally Indian and fashioned from tilla, is exquisite. The bodice, sleeves, and front have hand-crafted embroidery in gold and crimson with a circular scalloped border. There is a red and gold embroidered border on the dupatta, which is made of net.

It’s safe to say that the designer dressed to turn heads in an elaborate black gown and huge gold earrings, as well as a stunning nose piece with open hair and just the right amount of smokey makeup. Lets check Beautiful pictures of Minal Khan.