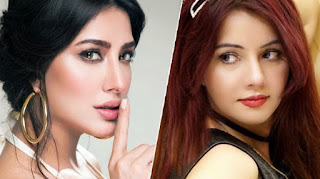 Kashmir has always been an issue between Pakistan and India because of the location. Indians have been killing innocent Kashmiris just for their own sake. All Kashmiris want is freedom and what are they getting instead of independence? Bloody streets, curfew, and loss of innocent lives.

[post_ads]
Many Pakistanis raised their voices for the #JusticeForKashmir. Celebrities shared their motivational videos on social media to create awareness among people to stand for poor Kashmiris. Mehwish Hayat is a socialist. She tries to help the needy ones and to make Pakistan a better place to live in. But she kept herself quiet on Kashmir issue. During a quick interview, the journalist even asked her to say something for Kashmir but she said that she was not allowed to do so. Her statement left everyone in shock. Rabi Pirzada posted her picture with a caption that she may not be a good actress like Mehwish Hayat or she may not have an experience like her but she is strong enough to raise her voice for Kashmir. She would help others as much as she can instead of wasting her money on plastic surgeries like Mehwish Hayat

What do you guys think of the story? Tell us in the comments section below.