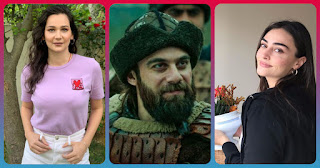 The world-renowned Turkish series ‘Ertugrul Ghazi’ is gaining popularity all over Pakistan. All the actors of Ertugrul Ghazi are being sent loving messages by Pakistanis and expressing their liking for him by commenting on its actors social media accounts. Javed Jaiten Gunir, who played the role of Duan Elp in Ertugrul Ghazi, while talking to the news agency, has given a video message to Pakistani fans, in which he says in Urdu that he will visit Pakistan soon. He said that he Imagine Pakistan his second home.

Our entire team is grateful to you for the positive response that Pakistanis have given to Ertugrul Ghazi.

Javed Jaiten Gunir while talking to the news agency said that before the shooting of the first season of Ertugrul Ghazi, I did not know swordsmanship for 6 months but after six months of struggle, I have mastered swordsmanship. In addition, Gülsim Ali, who played the role of a reformed woman in season 3 of ‘Ertugrul Ghazi’, also shared a photo on Instagram yesterday and released a message for her Pakistani fans.

It should be noted that on the instructions of Prime Minister Imran Khan, ‘Darlish Ertugrul’ is being dubbed in Urdu and is being aired on state TV under the name ‘Ertugral Ghazi’ which has now become a favorite drama of every Pakistani.