Reema clarifies Her stand on Airing of Ertugrul Ghazi 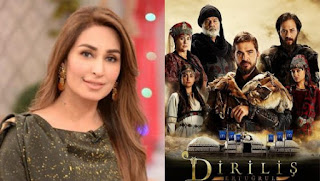 Last week, a statement was made by Pakistani film star Reema Khan regarding the Turkish drama ‘Ertugrul Ghazi’, which has set a record in Pakistan, after which she was severely criticized by the people on social media.

Actress Reema had raised her voice against the promotion of Turkish dramas in her statement. However, after the criticism, now Reema Khan has taken a U-turn and clarified her statement.

A video of Reema has surfaced on Facebook in which she is saying that her statement related to the Turkish drama was given the wrong color.

Reema Khan said in detail while hosting a private TV Ramadan transmission. It is not possible for me to be against a drama that presents Islamic history.
She added.
“I just wanted to say that when something is being shown on your state channel, the barter system should be implemented at a time when the dramas that have been made in the Pakistani television industry in the past”
Translated into Turkish and agreed by the government that our plays should also be presented in Turkey, so that our local industry can move forward and for those who are associated with the industry who are not getting work. There will be many opportunities.

It is to be noted that before Reema, Shan Shahid, a leading hero of Pakistani films, had also posted on Twitter against the airing of ‘Ertugrul Ghazi’ on the PTV channel.

@ImranKhanPTI sir I believe in this economic crisis we were not supporting imports .then why cultural imports are open . Why Ptv showing imported dramas believe in your own talent and history .With your supportive policies we can bring 🇵🇰🎥 on the entertainment map of the world