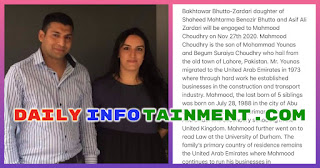 Bakhtawar Bhutto, daughter of Benazir Bhutto and former President Asif Ali Zardari, has said that unfortunately the engagement cards were leaked ahead of schedule.

she thanked her fans in a message on Twitter.

“I thank all the people for their good wishes”

Bakhtawar further said that unfortunately the engagement cards were leaked ahead of schedule. Bakhtawar added that he has absolutely no affiliation with any family in the United States, which is being cited by most media outlets.

Thank you everyone for the good wishes. Unfortunately the cards were leaked before even scheduled to be officially sent! Have absolutely NO affiliation with any family in the US which is being popularly quoted by most media. Hope this clears up all misinformation 💗 https://t.co/AprV6ebVfi

She added at the end of her tweet that she hoped that this would remove all misinformation and at the same time she has released an important information statement shared by the official Twitter account of the PPP.