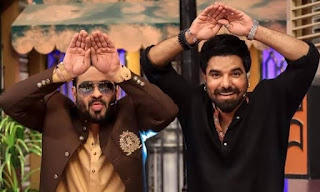 Over the past few days, Pakistan’s leading TV anchor, host and Pakistan Tehreek-e-Insaf (PTI) National Assembly member Dr Amir Liaquat Hussain has come under fire for his ‘snake dance’ on a Ramadan show.

Aamir Liaquat has done about half a dozen Ramadan shows under different names and these days he is hosting the Ramadan transmission of the private channel Express ‘Pyara Ramadan’.

During the same Ramadan transmission, a part of the program called ‘Jeeway Pakistan’ is aired these days in which various actors also participate. A few days ago, Ijaz Aslam and Nadia Khan participated in his show and during this time Aamir Liaquat gave this dangerous ‘snake dance’ performance in an attempt to become Sri Devi, which stunned the audience.

In the video, Aamir Liaquat can be seen lying on the stage of the show and dancing in a strange manner. Earlier, Aamir Liaquat trying to become Usain Bolt had forced everyone to press their fingers under their teeth with his fast run. It so happened that Naseem Hameed, the fastest female athlete in Pakistan, participated in Amir Liaquat’s Iftar transmission on April 17 and he sprinted with her.

However, no one is interested in knowing how many meters he ran. However, memes were made on him and Aamir Liaquat also faced severe criticism on both his videos. After which, Aamir Liaqat, while talking about this in his show, said, “I have promised myself and the organization that I will not do such dance anymore.”

“I raced with Naseem Hameed, I beat her halfway and in an attempt to cheet, I fell,” he said. Dr. Amir Liaqat added, “I have seen people make a lot of memes. I am never angry with the makers of memes. You make them. I am a public man.”

However, today again the pictures of Aamir Liaquat with actor Yasir Hussain have gone viral in which both of them are seen adopting the style of snake dance.